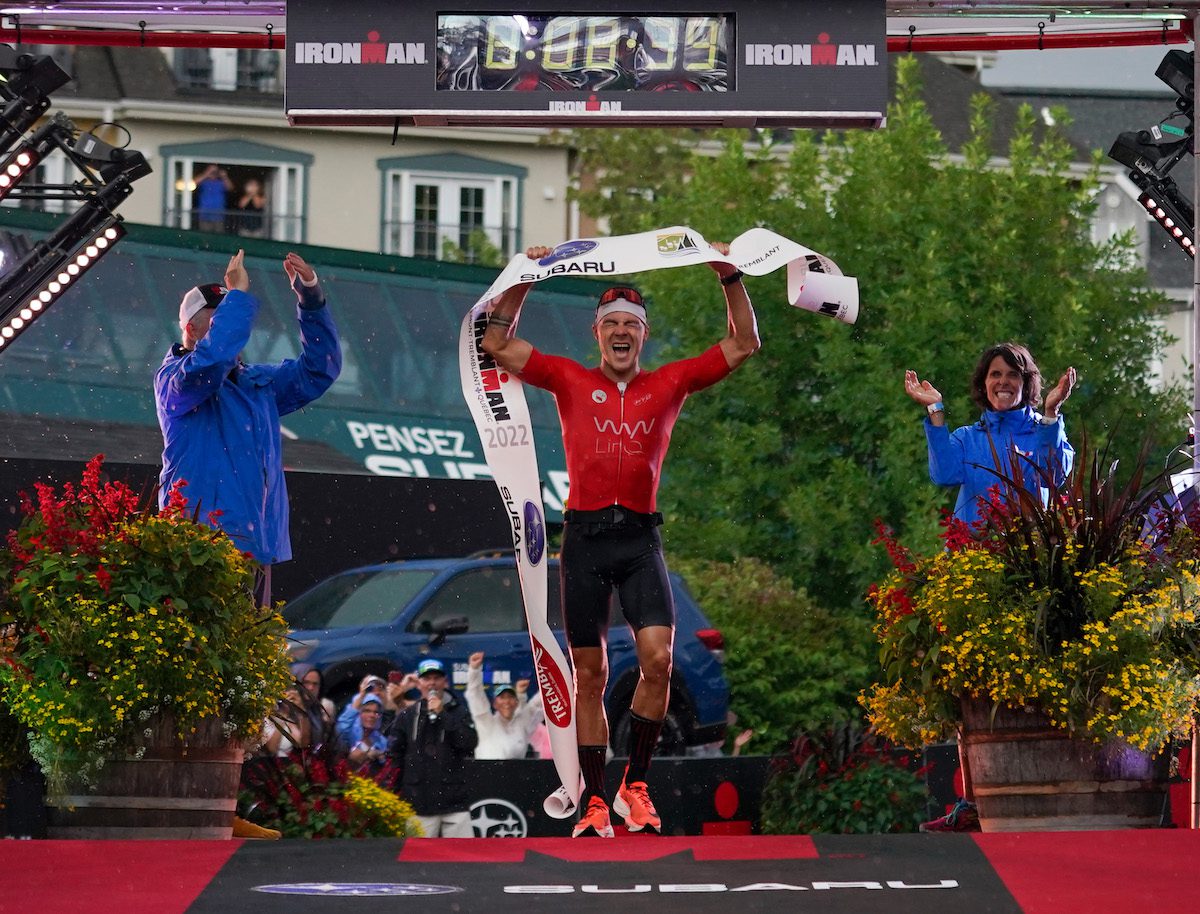 After 1,450 meters of elevation gain and a 4:27:23 split bike followed by what looked like a perfectly executed marathon, it was Collin Chartier’s step on the podium at the Ironman Mont- Trembling on Sunday.

“I don’t think I can do it,” he said, half-jokingly, as third-placed Canadian Cody Beals gave him a hand.

The victory was sweet for Chartier, 29, from Virginia, USA, who recently moved to Arizona, where he has a new training partner in Lionel Sanders. Both athletes are coached by Mikal Iden.

“It’s only been two and a half weeks in Tucson, but we’ve done a good job,” Chartier said.

Chartier has had his professional card since 2015, but only made the jump from ITU and half-distance races to the full-distance Ironman in South Africa last April, in a race where swimming was shortened to 700 meters due to cold and choppy sea conditions.

“It was my first full Full Ironman,” Chartier said. He played smart, he said: watching his pace, staying on top of his nutrition and following Sanders’ advice during the final hour of the race.

“He said, ‘You should pretend like you’re jogging for the first half of the race,'” Chartier said. “The real race is after two hours…that last 10K.”

Chartier finished in 8:08:40, four and a half minutes ahead of Australian Josh Amberger, followed a minute later by two-time Mont-Tremblant winner IM Beals, who holds the less than eight-hour course record set in 2019. Beals was the fastest rider on Sunday, nearly a minute ahead of Chartier with a time of 2:45:01, but he said he struggled on the bike stage from start to the end.

“Obviously it’s back to the drawing board with the bike training,” said Beals, 32, of Guelph, Ont. “Maybe I’m not as passionate about bike training right now as I could be, if I’m being honest. I got into racing – but not enough with a peloton of this caliber.

That field included the second Canadian to finish, 29-year-old Antoine Jolicoeur Desroches of Sainte-Anne-du-Lac, Que., who smashed the XTri CanadaMan/Woman record in Lac-Mégantic, Que., in early July. With a swim time of 47:54, Jolicoeur Desroches was the first out of the water but had to settle for seventh place overall, in 8:24:00.

“It’s the turn of the young athletes now,” said 12th-place finisher Romain Guillaume, the veteran professional who won the first Mont-Tremblant Ironman a decade ago. “They are amazing.”

Guillaume announced he would be retiring after 14 years of professional racing following Ironman Wisconsin on Sept. 11. With a toddler at home, he finds work-life balance hard to achieve.

“It’s hard to let go, he said, but at the end of this race, I was completely dead!

Chura surprises himself with victory

At 37, Guillaume may be ready to put his racing days behind him, but the female pros are just getting started. American Haley Chura, also 37, was the first female professional to cross the line, clocking 9:17:21 – her first full-distance title since Ironman Fortaleza in Brazil in her second year in as a pro in 2014. Chura was hit by a car the following year.

“It took me a while to get over it,” she said after her win on Sunday. Chura has won several half-distance races, including Challenge Puerto Varas, Chile last March, but she wasn’t sure another Ironman win would ever be in the cards.

“I’ve struggled in my last five Ironmans, where I couldn’t put it all together,” she said. “You savor the days when this comes together. It’s really special when it does.

There was a threat of a thunderstorm throughout the day on Sunday, but it never materialized – although the downpour in the last half of Chura’s run was a giveaway, she said. declared.

“I was kind of in a moment of depression, and the storm passed, and it shocked me to wake up and refresh myself,” Chura said. She’s not a fan of the heat, and because of that, she was still sitting on the fence Sunday claiming her spot in Kona.

“Kona is fair then hard,” she said. However, this year, for the first time, there will be an equal number of pro women and pro men in the world championship race, which will take place over two days.

“It’s something that excites me,” Chura said. Her longtime friend and training partner, with whom she raced Kona as an age group in 2009, convinced her to sign up for Mont Tremblant so she could have a shot at winning a spot. in Kona.
“You want to be in Kona for this historic moment,” she said. “It was a big push for why I’m here, so I’ll probably take the place.”

Sunday was Mont-Tremblant’s first time for runner-up Jen Annett of Penticton, B.C. Annett, also 37, would normally have raced in her hometown, but there will be no pro racing on next weekend at Ironman Canada.

“I looked at him and said, ‘Why not?’ I’ve always wanted to race here.

Annett qualified for Kona in Des Moines, Iowa in June with a second-place finish. She could barely contain her disappointment with another silver medal, after finishing in 9:24:20.

“If I could count the number of second places I’ve had,” she said. “I couldn’t have done better than today.”

Third place went to American Rachel Zilinskas, in 9:30:38. The only other Canadian professional in the race, Erin Snelgrove, was eighth in 9:56:50.