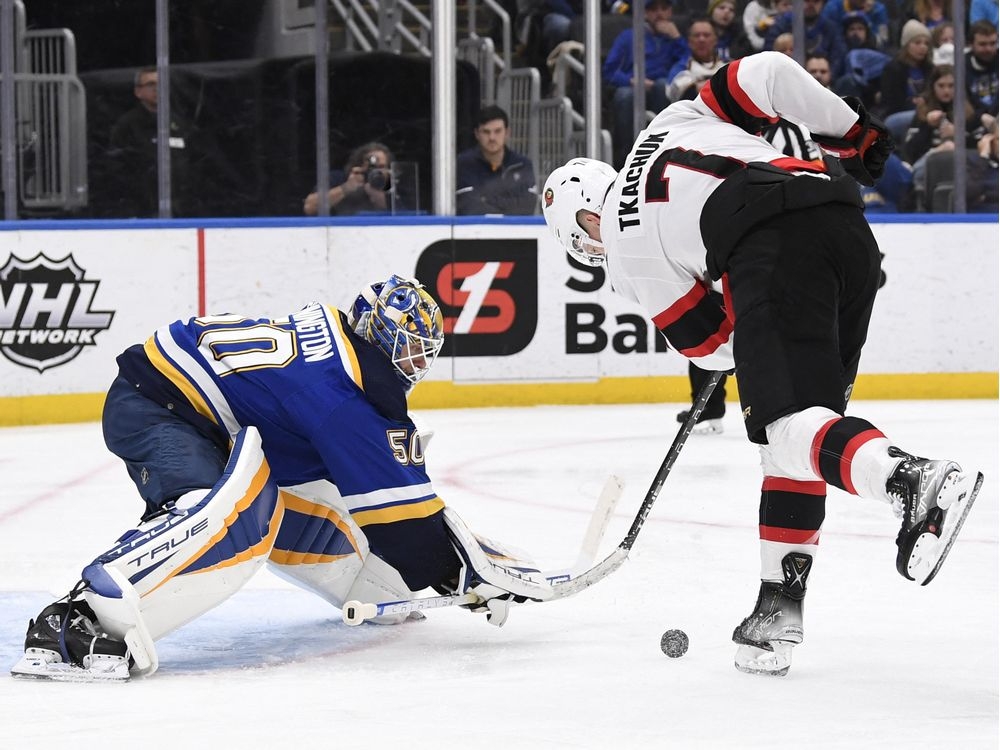 The Ottawa Senators are not going home empty handed.

Led by a third-period goal from captain Brady Tkachuk in his hometown, the Senators salvaged a five-game journey with a surprise 4-1 victory over the St. Louis Blues at Enterprise Center on Tuesday night.

After losing four straight during the 10-day journey, the Senators went home feeling good about themselves. Josh Norris and Tim Stuetzle also scored on the 27 shots the club took on Blues goalkeeper Jordan Binnington.

Alex Formenton put it in an empty net while Stuetzle and Norris both had three-point nights.

In trying to end a five-game losing streak, which was a season high in November when the club was struggling with COVID-19 issues, the Senators tried hard and did good. work in front of goalkeeper Anton Forsberg.

Forsberg made 21 saves in the win.

Making a rare appearance in St Louis, Tkachuk really wanted a goal in this one. He was all around the net and helped the club push for victory.

He came in big with his 19th of the season at 7:48 of third to basically put that one aside for the Senators. Tkachuk went to the net and sent the puck down Binnington’s five holes to give Ottawa a two-goal lead.

Just for good measure, the Blues organist played The Brady Bunch theme song after Tkachuk sent her home. It was his first goal against St. Louis and it couldn’t have happened at a better place.

“Unreal. I think it’s our best effort all year,” Tkachuk said. “We really emptied the tank to get the win here. I don’t play here often and it was special. I’m just happier with the result.

“We played our game and we played a full 60 minutes. (Scoring in St. Lous) was definitely something I always wanted to do.

Coming off a 2-1 loss to the Vegas Golden Knights on Sunday in Sin City, the Senators were hoping to build on that effort and get two points. The Blues picked up a 5-2 win over the Senators on Feb. 15 at Canadian Tire Centre.

“It was kind of like the Vegas game, we had everyone. We rolled four lines, the defense (was solid) and the goaltender continues to be excellent,” coach DJ Smith said. “When you get that kind of goalkeeper, you know you have a chance to win every night.

“I think our second half was one of our best in a long time and we put in a lot of miles.”

Forsberg made 40 saves in the last-minute loss to the Knights, but he wasn’t as busy in this one. Credit to the Senators, they played well in front of him, especially in the second, and tried to limit the chances.

The Blues made a huge push early in the final period. Vladimir Tarasenko was all alone up front, but Forsberg fired into the leather to stop a glove on a shot that would have leveled 2-2 early. You are going to see this one on the highlight reels.

“I was lucky there,” Forsberg said. “I heard him fall from his blade and threw up my glove. I had a bit of luck. Heard the pass and saw where it was going, sometimes you get lucky and it was the save at the right time.

“It was difficult to lose. It’s good to win and go. I think we played the last two games very well. We just have to keep going.

The Senators were 16-1-1 this season when they started the third with the lead.

Up 2-1 after 40 minutes, the Senators did a solid job of making sure the Blues didn’t get many chances. Ottawa outshot the Blues 11-3 in the second period only and it was tough for St. Louis to fight back.

Norris gave the club a 2-1 lead with Ottawa’s second of the night on the power play at 1:24 of the second. It was his 20th of the season and he came on a shot from his office in the right circle.

The Blues tied the game on a broken play from Ottawa. After Ryan O’Reilly managed to overturn the puck to keep it inside, he threw a perfect pass to David Perron on his own and beat Forsberg with a backhand to tie the game 1-1 at 14:43.

Stuetzle opened the scoring at 11:35 of the first. He was able to pick up a loose puck up front and send it to the back of Binnington’s skate. It was Stuetzle’s 13th power-play point this season.

The Senators host the Seattle Kraken on Thursday at the Canadian Tire Centre.

Sign up to receive daily news from SUN Ottawa, a division of Postmedia Network Inc.

A welcome email is on the way. If you don’t see it, please check your spam folder.

The next issue of The Ottawa Sun Headline News will soon be in your inbox.