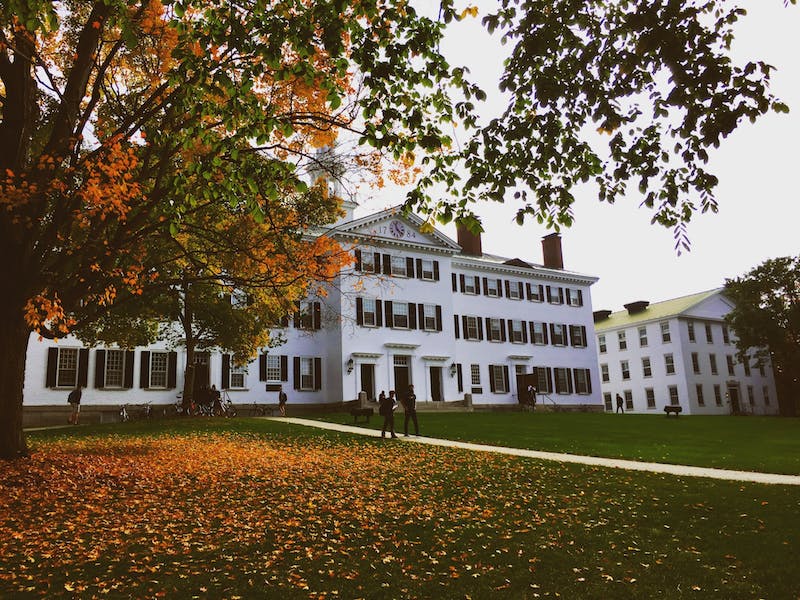 The event brought together the Dickey Center in Dartmouth and the Renew Democracy initiative.

by Kent Friel | 41 minutes ago


On Thursday, Russian chess grandmaster Garry Kasparov and Zimbabwean pastor Evan Mawarire – both pro-democracy activists – appeared as guest speakers on “Voices of Dissent”, a forum presented by the Dickey Center for International Understanding. More than 300 attendees filled the grand ballroom at the Hanover Inn for the event, during which Kasparov and Mawarire spoke about their experiences as advocates for democracy and human rights.

Hosted by Dickey Center Director Victoria Holt, the forum took a multimedia approach to linking the stories of Kasparov and Mawarire, including showing documentary films created through a partnership between the Renew Democracy Initiative – an organization in non-profit founded by Kasparov – and Dartmouth.

Although the two have spoken together at events organized by RDI – where Mawarire is director of education – the event brought their stories together in a way that had never been done before, the executive director said. from RDI, Uriel Epshtein.

The forum opened with a documentary that featured Kasparov, recounting his journey from chess champion to democracy activist. The eight-minute film combined news footage with interview segments, after which Kasparov took the stage, speaking in depth about the events shown in the film, including his arrests and his decision to leave Russia in 2013. Following his remarks, Kasparov presented the upcoming film, which tells the story of Mawarire and his role in the 2016-2017 democracy protests in Zimbabwe. After Mawarire took the stage to share some remarks, the event moved into a moderated discussion.

In answering questions from the audience, the two speakers directed their messages towards college students, emphasizing the importance of active participation in democracy. Reflecting on his experience working with ordinary people who stand up for democracy, Mawarire said he was continually amazed at the “power that ordinary people don’t know they have”. While small acts of dissent may seem inconsequential, he argued that pro-democracy decisions take courage. Dissenters, Mawarire added, are key to shaping the future because “when one generation abdicates its duty, it weighs on the next generation.”

Although both Mawarire and Kasparov spoke about how American democracy serves as a beacon for international dissidents, they also said they feared the results of democracy’s polarization and abstention. Mawarire implored the public to be accountable, adding that there must be a “reality check on alternatives to democracy”. Kasparov stressed the importance of being vigilant and proactive in maintaining American democracy and also noted that majority rule is not democratic without minority protections and a peaceful transfer of power.

Asked about the future, both speakers remained optimistic that the citizens of their respective home countries would continue to fight for democracy. When asked if he believed Russia would become democratic, Kasparov said Russia could arrive at “democracy by default”. Kasparov said that, faced with the “choice [between] becoming some sort of Chinese colony that supplies natural resources to Beijing, or trying desperately to turn back the clock to becoming a member of the family of civilized nations,” Russia sees democracy as the best alternative. For that to happen, however, he said democracies around the world would need to grow stronger through national and international partnerships, saying a league of democracies would be more powerful than the United Nations in promoting human rights. and democracy abroad.

Kasparov and Mawarire, however, saw a danger in the loss of faith in democracy around the world. The fight for justice, Mawarire said, “cannot be outsourced”. Kasparov added that “nothing happens without taking risks”. Risk is the price to pay for potential success, Kasparov said.

Rohan Menezes ’23, an international student who was an activist in India before coming to Dartmouth, said he attended the event to learn more about how activists can inspire courage in others. Menezes said that although he did not know Mawarire before the forum, he found the event “extremely, extremely powerful”.

In addition to the evening event, Kasparov and Mawarire met with students and faculty during the day, Holt said.

John Carey, associate dean of the faculty of social sciences, underscored the danger Kasparov faced in speaking out against Putin in Russia. “Putin’s critics, when they get big enough, tend to wind up dead,” he said.

Dissidents make hard choices because they don’t like alternatives, said government professor Yusaku Horiuchi, who added that citizens of repressive regimes have three choices: speak out against the government, leave the country or keep quiet.

Holt and Epshtein noted the use of documentary video as an important part of the event. Smartypants, a New York-based media production company, produced the two films shown at the event for several months and conducted hours of interviews with Kasparov and Mawarire.

In an interview ahead of the event, Mawarire said that “there is a level of engagement with the students here that is quite exciting.”

“Dissent strengthens our collective form of government,” he said. “When we crush dissent, we prevent ourselves from becoming better at governance.”

RSV: the common childhood virus on the rise in Canada

How to prepare for a recession — even if -2-