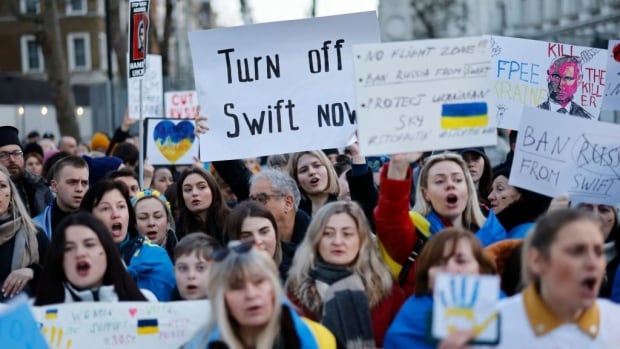 UPDATE: After this article was published, news broke that the US, UK, Europe and Canada are planning to block Russia’s access to the international banking communication platform SWIFT in a new round of sanctions against Moscow.

Countries around the world have imposed sanctions on Russia for its invasion of Ukraine, with some also calling for Moscow to ban SWIFT, a banking communications platform used by financial institutions in more than 200 countries.

CBC News takes a look at SWIFT, how Russia could be affected if it were removed from the important system, and why some countries are reluctant to take the step.

SWIFT is the acronym for Society of Worldwide Interbank Financial Telecommunication. The Belgium-based cooperative is used by thousands of financial institutions in more than 200 countries, including Russia, and provides a secure messaging system to facilitate cross-border money transfers.

The system received an average of 42 million messages a day last year to enable payments. About half of all high-value payments that cross national borders go through its platform.

SWIFT is very much like a “social network for banks” that doesn’t move money, but provides information about where the money is going, said Alexandra Vacroux, executive director of the Davis Center for Russian and Eurasian Studies at the Harvard University in Massachusetts.

WATCH | Trudeau says withdrawing from SWIFT would prevent Putin from profiting from the war:

Banks that connect to the SWIFT system and establish relationships with other banks can use messages from the system to make payments, Reuters reports. Messages are secure so that payment instructions are usually honored without question. This allows banks to process large volumes of transactions at high speed. It has become the main financing mechanism for international trade.

You can think of SWIFT as the backbone of the financial services industry.– Markos Zachariadis, University of Manchester

“You can think of SWIFT as the backbone of the financial services industry,” said Markos Zachariadis, professor and chair of financial technology and information systems at the University of Manchester.

“It’s the most influential infrastructure we have in financial services in terms of the volume and value of money that’s moved around the world.”

How dependent is Russia on SWIFT?

According to the Russian National Swift Association, around 300 major banks and organizations in the country are SWIFT users, more than half of Russian credit organizations are represented in SWIFT, and Russia is ranked second in the number of platform users. form, after the United States.

What would be the impact on Russia if it were banned from SWIFT?

Excluding Russian banks from SWIFT would restrict the country’s access to financial markets around the world.

It would almost be like cutting a country off from the internet, Zachariadis said.

“Imagine all these organizations operating online. They have their customers where they send information and transact without suddenly having access to that infrastructure.”

Maria Shagina, a Helsinki-based international sanctions expert, wrote last year in an article for the Carnegie Moscow Center that the impact of Russia’s SWIFT ban could be as devastating as it has been. for Iran, which was denied access to the system in 2012 for its nuclear program.

“Russia is heavily dependent on SWIFT due to its…USD-denominated hydrocarbon exports. The shutdown would end all international transactions, trigger currency volatility and cause massive capital outflows,” he said. -she writes.

Vacroux said that with Russia’s federal budget being so heavily dependent on taxes generated by the export of raw materials such as oil and gas, it would be difficult to make sales and then get the money needed for the country’s budget. .

Biden defends the effectiveness of sanctions against Russia

Asked by reporters about the effectiveness of sanctions against Russia for its actions in Ukraine, US President Joe Biden said the measures were “profound” and “exceeded anything that had been done”. 2:45

But some experts have questioned whether Russia’s expulsion from SWIFT is as devastating as other potential sanctions.

“I think there is too much focus on SWIFT versus its impact and insufficient focus on US banking sanctions versus their impact,” said Chris Miller, assistant professor of international history. at the Fletcher School at Tufts University, and co-director of the Russia and Eurasia program at the Massachusetts school.

Miller said threatening to cut Russia’s big banks off from the US financial system would certainly have more teeth.

“It’s a communications platform, not a financial payments system,” Adam Smith, an international lawyer who focuses on international trade and worked in the Obama administration, told CBS News. “If you take Russia out of SWIFT, you take it out of a key financial artery, but it can use pre-SWIFT tools like phone, telex or email to do interbank transactions.”

Are there any alternative systems that Russia could use?

Following the Russian invasion of Crimea in 2014 which led to calls to eject Russia from SWIFT, the Central Bank of Russia began planning the development of an alternative to SWIFT: the message transfer system financial (SPFS).

As of February 2020, more than 400 Russian banks have joined SPFS, surpassing the number of Russian banks registered with SWIFT, according to Harley Balzer, expert on Russia and Russian-Chinese relations and professor emeritus at Georgetown University in Washington, D.C.

The Russian government has subsidized banks to try to encourage use, prompting banks in the country to want to be part of the SPFS because it lowers their fees, Balzer said.

But so far only a dozen foreign banks are using it, including a Chinese bank, which means “it’s really not going to help [Russia] a lot for international payment transfers,” he said.

Why are some countries reluctant to ban SWIFT from Russia?

Countries seem divided on whether to kick Russia out of SWIFT. Britain as well as Canadian Prime Minister Justin Trudeau have called for cutting Russia off the platform.

On Friday, France’s finance minister said the European Union would soon analyze the consequences of Russia’s expulsion from SWIFT, while Italy said it would not veto such a proposal. Meanwhile, German Foreign Minister Annalena Baerbock has expressed skepticism of such a move, while US President Joe Biden has ruled it out for now.

The United States and Germany would stand to lose the most if Russia were disconnected from SWIFT, as banks in these two countries most frequently use SWIFT to communicate with Russian banks, wrote Shagina, the international sanctions expert. , in the Carnegie Moscow Center article.

For Germany and Italy, it is what SWIFT is used to paying that would cause problems if Russia were excluded.

“Germany and Italy are very heavily dependent on gas imported from Russia. So, blanket sanctions against Russian banks or a blanket ban of the entire Russian financial system from SWIFT would mean they couldn’t pay their gas bills,” said University history professor Adam Tooze. of Columbia in New York and director of the European Institute.

Zachariadis said it’s not just Russia that would suffer from being excluded from SWIFT.

ASU will soon prioritize the renovation of the Desert Financial Arena