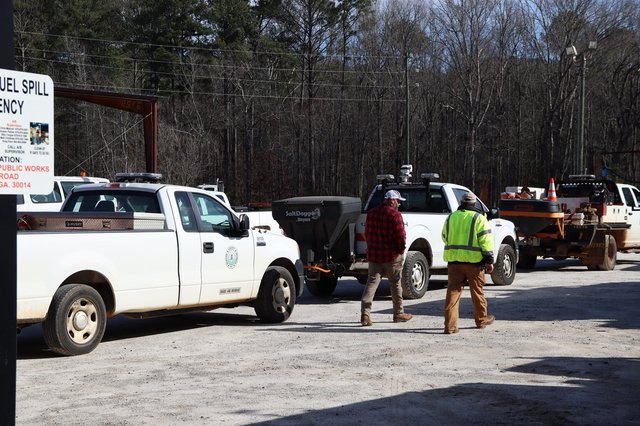 COVINGTON, Ga. – GDOT maintenance forces and contractors for eastern Georgia, including Newton County, were scheduled to begin brine operations this morning, Jan. 14, and continue 12-hour shifts until to Saturday evening, a spokesperson said. .

And Newton County officials said crews are prepared to keep the county’s road system clear in the event of freezing precipitation.

The county’s public works department will have four salt trucks and five crews stationed in Newton starting Saturday, along with 100 tons of salt/sand mix and 50 tons of calcium chloride, the spokesperson said. Brian Fazio.

“County trucks are loaded and ready to go,” Fazio said.

A GDOT spokesperson said crews will apply brine solution to highways, state roads, bridges and overpasses in anticipation of freezing rain, sleet, ice and snow over the next few months. days during the initial phase preceding the arrival of the weather system.

Brine is a solution of salt and water used to reduce the likelihood of freezing under certain conditions. It takes 24 hours to complete a brine cycle, he said.

On Saturday, crews will switch to salt/rock application and continue deployments as required through Sunday and Monday.

The current business plan extends along and north of the I-20 corridor from Covington to Augusta. The brine will be deployed as far south as Georgia Hwy. 540 (the Fall Line Freeway) in central Georgia based on current weather reports — subject to change, the spokesperson said.

“As wintry weather is expected to hit parts of northern Georgia and potentially the mid-east region this weekend, the Georgia Department of Transportation (GDOT) is actively preparing and coordinating brine operations, equipment, materials and staffing plans to respond to the imminent threat by addressing hundreds of miles of interstate and national roads across the 27-county area of ​​District 2,” the spokesperson said.

He said District 2 has the following equipment, materials and personnel:

• More than 285 employees and 16 subcontractors on call; more than 2,000 employees statewide;

• 1.25 million gallons of brine available statewide with the capacity to produce 50,000 gallons per hour;

As early as 72 hours before winter conditions are expected to arrive, GDOT’s emergency response team begins coordinating staffing to be ready to activate at least 24 hours before a storm hits.

“As forecasts have evolved, it has become more likely that a significant area of ​​Georgia will experience icy conditions as part of the incoming storm system. The ice adds a level of complexity, as well as a increased danger, for our crews and motorists,” he said.

“We anticipate downed trees, branches and power lines. It is essential that motorists take this storm system very seriously and stay off the roads until the end of the event to give our crews the space they need to work,” said McMurry.

"I still want to play" - The Athletic