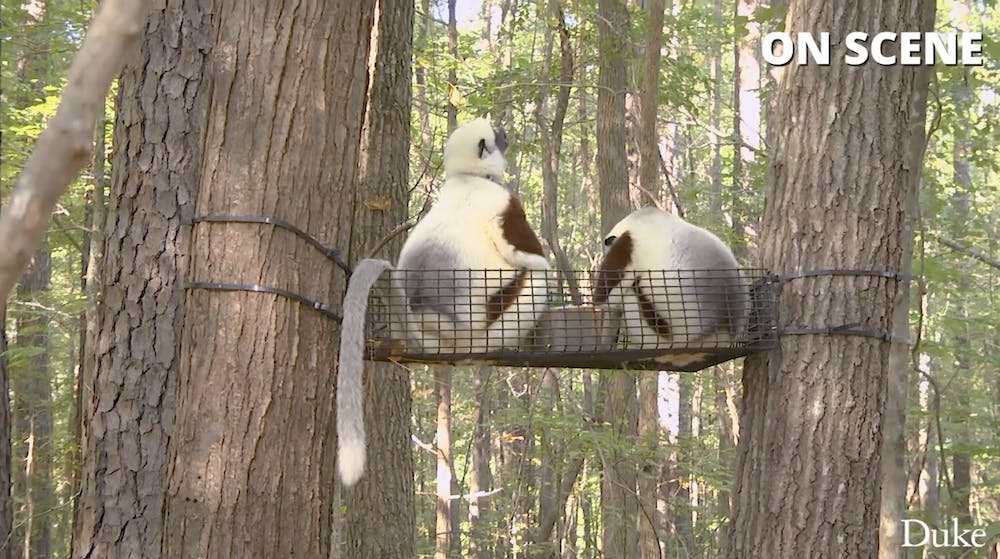 October 29 was not just another Friday. It was World Lemur Day.

The public was invited by the Duke Lemur Center to celebrate the day by taking a virtual tour of the center and learning more about the conservation of lemur species. The event was broadcast on YouTube and Facebook Live and featured Director of Global Communications Greg Phillips speaking to several staff about lemurs.

Faye Goodwin, Senior Education Specialist, was the first to present, along with a family of three Coquerel sifaka lemurs: Lupicina, Elagabalus and Felix.

Goodwin spoke about the pressing issues of lemur ecology and the challenges the species faces in Madagascar. Lemurs, as Goodwin noted, are the most endangered mammal species on Earth and can only be found in Madagascar.

â€œThe number one threat to lemurs right now is deforestation in Madagascar,â€ Goodwin said. â€œThe majority of deforestation is due to the fact that Madagascar is one of the ten poorest nations in the world. “

The loss of natural habitats for lemurs in Madagascar has reduced the number of more than 100 native species of lemurs, as the plight of subsistence slash-and-burn agriculture continues to compromise the tropical country’s environment.

However, the Duke Lemur Center is one of many institutions around the world hoping to provide wildlife refuges for these lemurs and institute conservation measures in Madagascar. This year marks the center’s 55th anniversary as a conservatory, and the center has been working on the ground in Madagascar for over 35 years.

Colony curator Britt Keith joined in on how the center is helping maintain the health of global lemur populations.

“We’re not officially a zoo, but we do our best and actually lead a lot of the prosimian selection process because obviously we have more prosimians than any other institution in the United States,” explained Keith.

Prosimians, a nomenclature for the suborder Primates, including lemurs, face many challenges in maintaining populations in the wild. But the Duke Lemur Center breeding program has celebrated more than 3,285 births since its inception.

â€œIt’s not as easy as you might think,â€ Keith added. â€œSome animals are not easy to raise. Animals need good nutrition, the female must have the right reproductive cycle and good health. Sometimes it’s just a few animals that just don’t fit together.

Keith’s job as the coordinator of the species adviser program, another aspect of her position as curator, ensures that the center does everything possible to be both passive and facilitator in the breeding process, leading the lemurs to them. to each other without any form of taming or domestication.

Get The Chronicle delivered straight to your inbox

Subscribe to our weekly newsletter organized by an editorial. Cancel anytime.

The show continued with Phillips and Keith visiting an enclosure of a critically endangered species, the red lemur.

Red lemurs are found in a separate space from other lemur species; the center has nine separate enclosures ranging from one and a half to fourteen acres for different families and species.

â€œThey would just fight or drive them over fences or really hurt themselves,â€ Keith said. “But we are trying to make sure all of our lemurs are free.”

Being able to help a species in need led Keith to develop an emotional connection with his work.

â€œIn this area with animals, there is always a trust and a relationship that we build with the animals we work with,â€ Keith said. â€œI think we all have favorites; I still swear I won’t, but I allow myself to always have them that way.

Coachella Valley Arena: team name and logo to be revealed on Friday