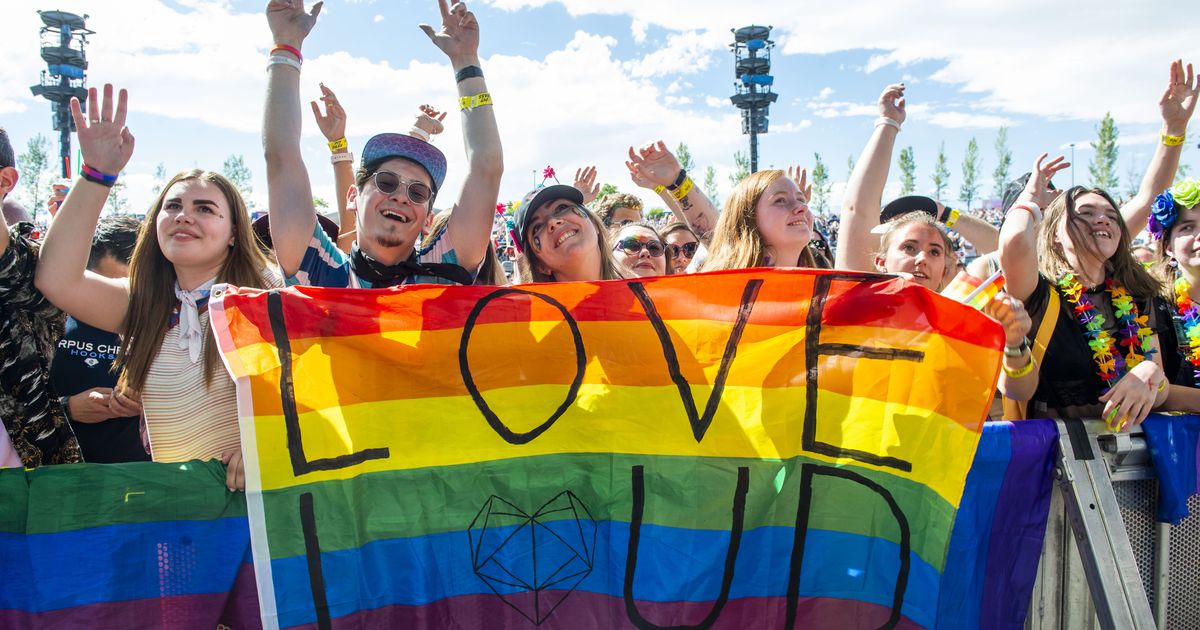 The one-day event for LGBTQ+ youth and their allies will feature founder Dan Reynolds, The Aces and Neon Trees.

Dan Reynolds’ LoveLoud Festival will return in 2022, celebrating LGBTQ+ youth and their allies, after skipping the past two summers due to the COVID-19 pandemic.

Also on the program: pop-punk musician WILLOW (this is how Willow Smith, child of movie stars Will Smith and Jada Pinkett-Smith, now bills herself), Brazilian pop star Anitta and father-daughter based in Utah singing duo Mat & Savanna Shaw. Other artists should be announced.

Tickets for the event go on sale Wednesday, March 9 at 10 a.m. on LoveLoud’s website, loveloudfest.com. Proceeds will be donated to several LGBTQ+ organizations, including Encircle, the Tegan and Sara Foundation, The Trevor Project and Equality Utah.

This year’s festival will be the fourth in the event’s history – and the first in an indoor venue. Utah Jazz owner Ryan Smith and his wife, Ashley, made the arena available for free and donated $1 million to the LoveLoud Foundation.

(Jason Lee | Red Bull Records) The Aces, Orem’s all-female indie-pop quartet – left to right: drummer Alisa Ramirez, vocalist Cristal Ramirez, guitarist Katie Henderson and bassist McKenna Petty – will be the one of the headliners for the 2022 LoveLoud Festival on May 14, 2022 at the Vivint Smart Home Arena in Salt Lake City.

“Without the commitment of Ryan and Ashley, the festival may not have been a reality even this year,” Reynolds said in a statement, “and we are grateful that they recognize the event as a must-see in the community.”

Clarissa Savage, who started volunteering with LoveLoud in 2017 and is now its executive director, said she “always wanted to try it indoors because a lot of the issues we had in the past would have been solved by having it inside”. .”

She recalled the sweltering heat during the 2018 festival at Rice-Eccles Stadium, and also said The Viv had audio and lighting capabilities that outdoor venues lacked.

LoveLoud’s goals remain the same, Savage said: To create space for conversation in support of LGBTQ+ youth in Utah. Putting the event at The Viv — in the heart of downtown Salt Lake City, three blocks from Temple Square, headquarters of The Church of Jesus Christ of Latter-day Saints — bringing this conversation right to the doorsteps of the faith of the Latter-day Saints. (Reynolds is a member of the faith, as is Neon Trees drummer Elaine Bradley. Neon Trees frontman Tyler Glenn was raised in the faith but left the church several years ago.)

Savage said seeing the festival evolve from something “so popular” to an event on “the national sphere” inspired the organization to step up its efforts to amplify the voice of Utah’s LGBTQ+ community. .

(Rick Egan | The Salt Lake Tribune) Dan Reynolds, lead singer of Imagine Dragons, addresses the crowd at the start of the LoveLoud Festival at the USANA Amphitheater on Saturday, June 29, 2019. Reynolds, the festival’s founder, will be the l one of the performers during the 2022 rendition on May 14, 2022 at the Vivint Smart Home Arena in Salt Lake City.

One result of that effort, Savage said, is programming from LGBTQ+ and Utah artists. For example, three-quarters of the Aces, who are from Orem, identify as gay, while Glenn, who lives in Salt Lake City, is gay.

“We want to see our LGBTQ community celebrated year-round, and I think the best way to do that is to make sure those people who come from this state and live their best lives are seen,” Savage said.

Specific details of the festival schedule are still being worked out, but Savage noted that there will be an effort to ensure the voices of trans youth are “heard and amplified.” As trans rights are under attack across the country — where even families in Utah are being driven out — it’s a “huge mission” to listen to trans youth.

LoveLoud has put together a series of video podcast interviews, “Love Listens,” during the pandemic, Savage noted – but added that it would be nice to see each other in person again.

“What’s so unique and special about LoveLoud,” Savage said, “is a literal day where no matter where you are in your journey, you can come in and feel like you’ll leave feeling better. about something. If you come to LoveLoud, you will leave feeling some kind of love.

(Republic Records) Utah-based pop-rock band Neon Trees – (left to right) Chris Allen, Tyler Glenn, Elaine Bradley and Branden Campbell – will be one of the headliners at the LoveLoud festival, May 14, 2022 , at Vivint Smart Home Arena in Salt Lake City.

On Ukraine, the Congress speaks of operations "without propaganda" in appeal to the center | Latest India News