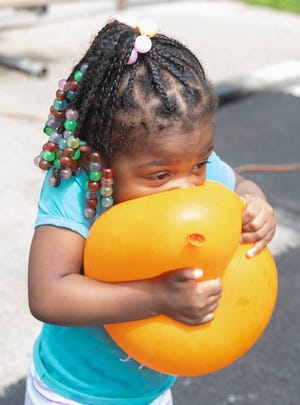 Families across Portage County were invited to pick up free school supplies and indulge in some last-minute summer fun Saturday at the King Kennedy Community Center in Ravenna.

In the spirit of back to school, Anitra Tolbert of Tasty Encounter Catering Co., Erica Felder of Chiron Health and Human Service and Myia Sanders, Program Manager at King Kennedy Community Center (KKCC), hosted the event, held from noon to 4 p.m. Representatives from the Skeels-Mathews Community Center were present and participated in the event.

Sanders estimated that by 1 p.m. at least 60 people had passed, and likely more.

Backpacks and school supplies to fill them were distributed free of charge to all who needed them. There was no income level requirement.

An inflatable bouncy house, 360-degree photo booth, and face-painting station were on hand to keep the kids entertained. Haircuts and hairstyles were also available for children. The University Hospitals provided lunch.

Veronica Cline, a mother of three with a daughter starting kindergarten this year, said the event was helpful. Without it, she would have been at the mercy of school supplies amid record inflation.

“If it hadn’t been for my friend Chelsea here, I wouldn’t have known,” Cline said.

Chelsea Johnston, who has two daughters, said the event at KKCC helped her tremendously.

“I was very excited to come here,” Johnston said. “It’s nice to take some of the stress out of having to worry about packing everything for the kids at the last minute. I only make a certain amount a week. With a fixed income, that helps a lot. “

Johnston and Cline both said they would be back when the event returns to KKCC for the 2023 back-to-school season.

The community center was built in the McElrath neighborhood in 1978, when it was considered one of the most deprived rural communities in America.

In 2002, KKCC merged with Family & Community Services Inc. In 2020, it opened a new gymnasium and multipurpose facility. This month, the outdoor basketball court received a fresh coat of paint.

No. 18 Badgers seek to reclaim status as Big Ten contenders