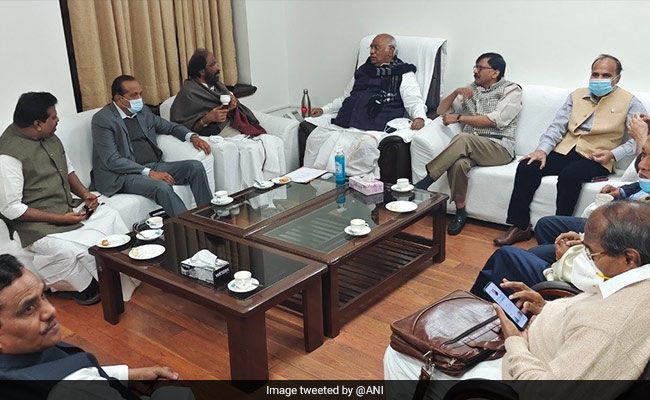 Demanding that the government call a multi-party meeting, opposition leader Rajya Sabha and high-ranking Congressman Mallikarjun Kharge said today that the Center’s invitation to four opposition parties to discuss the issue of the 12 deputies was “a plot to divide the opposition”.

Congress Party leader in Lok Sabha Adhir Ranjan Chowdhury said that the functioning of parliament depends on the government.

“It depends on the government how it wants to run Lok Sabha. The government has not called us to any meeting because it is Rajya Sabha,” Chowdhury said, adding that the opposition would raise the issue of the resignation of Minister of State for the Interior Ajay Mishra Teni on the issue of Lakhimpur Kheri.

Parliamentary Affairs Minister Pralhad Joshi criticized the opposition for creating an impasse on the function of parliament.

“We want to talk to the opposition parties whose Rajya Sabha MPs have been suspended to find a solution. They (the opposition) are boycotting the meeting. They also boycotted the Constitution Day event … They must understand that the public is boycotting them too, “Pralhad Joshi told ANI news agency.

Meanwhile, Prime Minister Narendra Modi held a meeting with his government’s senior ministers in parliament today to discuss various issues and the strategy for the current winter session.

Opposition parties have decided not to attend meetings called by the government to end the Rajya Sabha stalemate during the current winter session of parliament.

The decision was taken after a meeting of opposition parties this morning.

“We will not attend the meeting called by the government. We will demand the resignation of MoS Home Ajay Kumar Misra and the revocation of the suspension of 12 opposition MPs in Rajya Sabha. We will not leave both houses of parliament function, â€said Shiv Sena MP Sanjay. said Raut.

Today’s meeting of the leaders of the two chambers of parliament has been called to define the new strategy to revoke the suspension of 12 opposition MPs and to call for the resignation of the Minister of State for the Interior Ajay Mishra Teni.

Notably, the central government today called a meeting of five political parties whose deputies were suspended from the Rajya Sabha to break the deadlock between the government and the opposition in the House.

12 Rajya Sabha MPs were suspended from the House on the first day of the winter session of Parliament from 5 political parties including Congress, TMC, Shiv Sena, CPI, CPI (M). After the suspension, the 12 deputies sit daily in Dharna in front of Gandhi’s statue in Parliament.

Rajya Sabha has been repeatedly adjourned due to the uproar in the Upper House by opposition parties demanding to revoke the suspension of MPs during the current winter session of Parliament.

Parliament’s winter session is scheduled to end on December 23.

(Except for the title, this story was not edited by NDTV staff and is posted from a syndicated feed.)