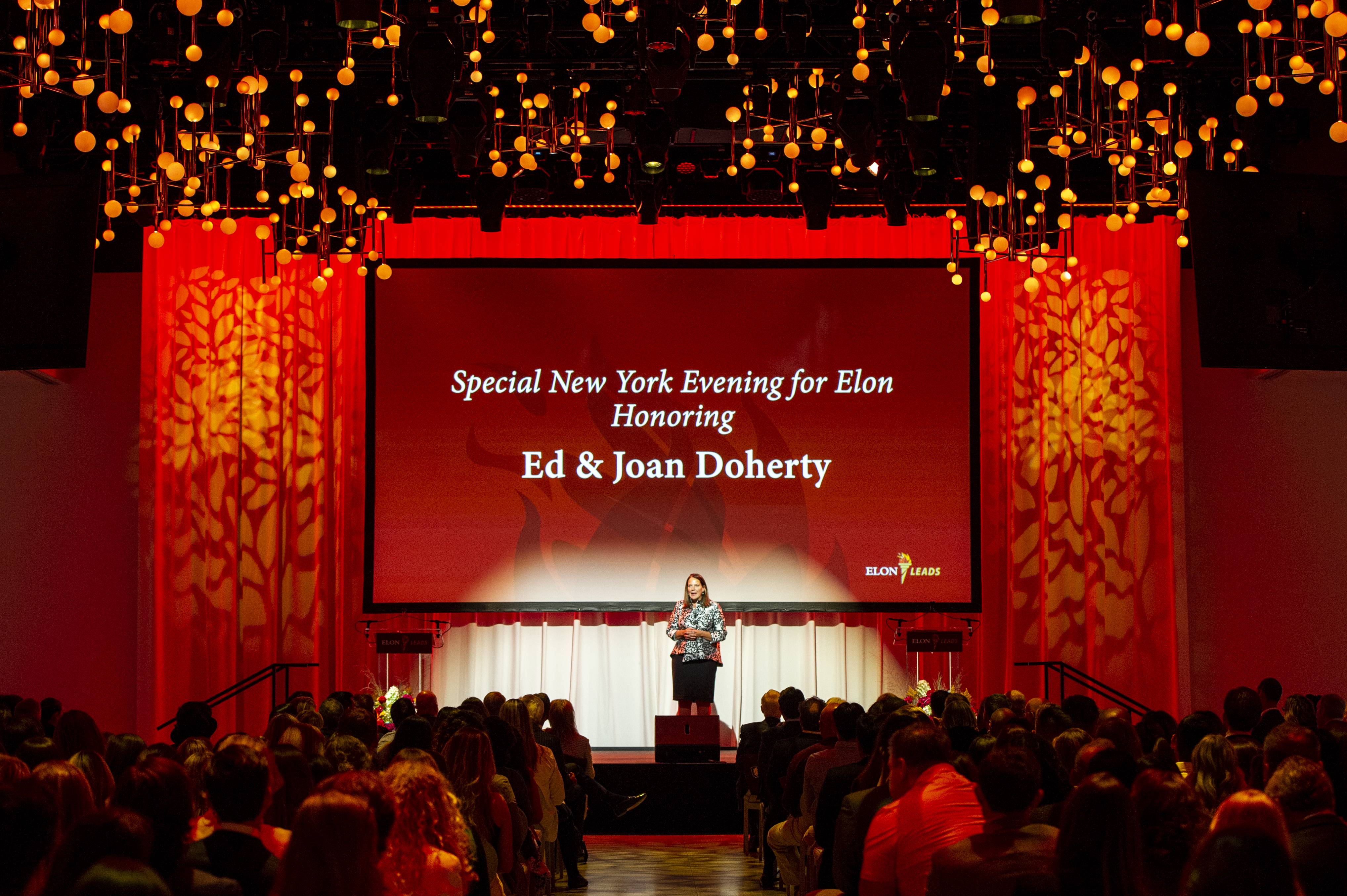 An energetic group of alumni, parents and friends epitomized the strength of the Elon Network in New York as they gathered at an impressive new venue, The Glasshouse, this week to hear about the impact of the campaign. Elon LEADS so far and what lies ahead for college as the campaign draws to a close on December 31.

The special evening for Elon celebrated donors who are making a lasting impact on students through Elon LEADS, the university’s landmark campaign to raise $250 million in support of four key priorities: scholarships, engaged learning programs, support for faculty and staff mentors, and enhancements to Elon’s signature learning environment.

The event also included a special tribute to Elon Trustee Ed Doherty and Joan Doherty, who received the university’s highest honor, the Elon Medallion, for their visionary leadership in strengthening the Elon Network in New York and their generous university support. Parents of Kerry Doherty Gatlin ’07 and son-in-law Doug Gatlin ’08, the Dohertys were instrumental in creating and sponsoring an annual Elon event in New York that has since brought together thousands of alumni, relatives and friends at iconic locations including the Waldorf Astoria, The Plaza, Intrepid Aircraft Carrier and Lincoln Center.

“Ed and Joan recognized early on the importance to Elon’s future of growing the New York network,” said Connie Ledoux Book, president of Elon University. “For over a decade they have hosted this event, which has grown exponentially due to their leadership and generosity.”

Attendees also heard about the university’s journey to the end of the Elon LEADS campaign and beyond, anchored by the initiatives outlined in the university’s current strategic plan, Boldly Elon.

“Elon LEADS has transformed the university and positioned us for continued success by fueling Elon’s rise,” said Chairman Book. “This campaign has taught us that there is more to do and so much more to achieve.”

These forward-looking initiatives include:

Vice President for University Advancement, James B. Piatt, Jr., shared the extent of the impact campaign donors have already had through their philanthropy.

“Tonight we enter the final months of the historic $250 million Elon LEADS campaign. When we launched this campaign a few years ago, we could never have predicted how the world would change, but the meaning of Elon’s resilience runs deep and our community has rallied together,” said Piatt.

“As we race towards the finish line of the December 31 campaign, we want to share the impact of this campaign on the lives of our students – the priorities that are not yet completed and how this campaign has positioned Elon for success going forward,” he added.

“My story begins when I was 13, during which time I lost my father to cancer and was a passenger in my life turned upside down,” said Inman Family Fellowship recipient Rosen. Scholarship in the Odyssey program and business scholar in the Martha & Spencer Love School of Business. “My family had to deal with a mountain of hospital bills and funeral costs that we could no longer afford. In a few months, I matured years. Still, I worried that a college education wasn’t in the cards for me. Then I discovered Elon and the Odyssey and Business Fellows scholarship programs, which gave me the opportunity to pursue my dreams, avoid major financial debt and make my father proud.

Rosen then shared some of the transformative experiences she had at Elon while majoring in finance and human resources and data science, including study abroad experiences in Paris, Milan and Japan and two internships at Goldman Sachs, where she accepted a position as a credit risk analyst after graduating from Elon in May 2023.

“I’m really humbled because this position at Goldman has been my goal since day one, and I know my dad smiles at me,” said Rosen, who thanked his faculty mentors Elon, Tina Das, Steve DeLoach, Katy Rouse and Kate. Upton, as well as the parents of Elon Bill and Patricia Inman P’00. “Being an Inman Scholar allows me to lead by example and demonstrate all that Elon has to offer brilliant students who are forced to overcome challenges early in life. I am forever grateful to the Inmans for investing in me, and to all the donors who have made the scholarships for scholars possible.

Elon LEADS co-chairs Priscilla Awkard ’95, Christian Wiggins ’03 and Jack McMackin ’08 sent a message to alumni encouraging them to continue their involvement in the campaign and in university life. They also shared greetings from co-chair Maity Interiano ’07, who was scheduled to attend the event but was called in by her job as a main television presenter for the Univision network.

“I learned that no one has to do everything, but we can all do something,” Wiggins said. “I may not help every student with my donations, but I know my investment in Elon is meaningful and will change someone’s life. You never know whose life you might change with your donations.

Annual donations from alumni, students, parents, faculty, staff and friends have been a key driver of Elon LEADS’ success. More than 32,000 donors made donations during the campaign, with their donations matching every dollar amount and supporting a wide range of funds on campus. This continued support recently led to Elon being named No. 21 in the nation for alumni who participated by US News & World Report, an honor the university shares with Boston College, Cornell, Villanova and Wake Forest.

The event ended with a performance of “I’ll Be There” by Sidney Wilson ’21, who graduated from Elon just a year ago and has already landed a starring role in The Lion King on Broadway, giving the crowd a powerful reminder of the strength of Elon’s top 10 rated musical theater program.

The evening ended with a loyal alumni celebration honoring the university’s current alumni and most active alumni volunteers.

The Elon LEADS event in New York was the second of five special Elon nights scheduled for fall 2022. The series made its first stop in Atlanta on September 7, with remaining events scheduled in Boston (October 12), Los Angeles (Nov. 1) and Washington, DC (Nov. 15).

Can the laws protect you from excessive interest rates on loans?