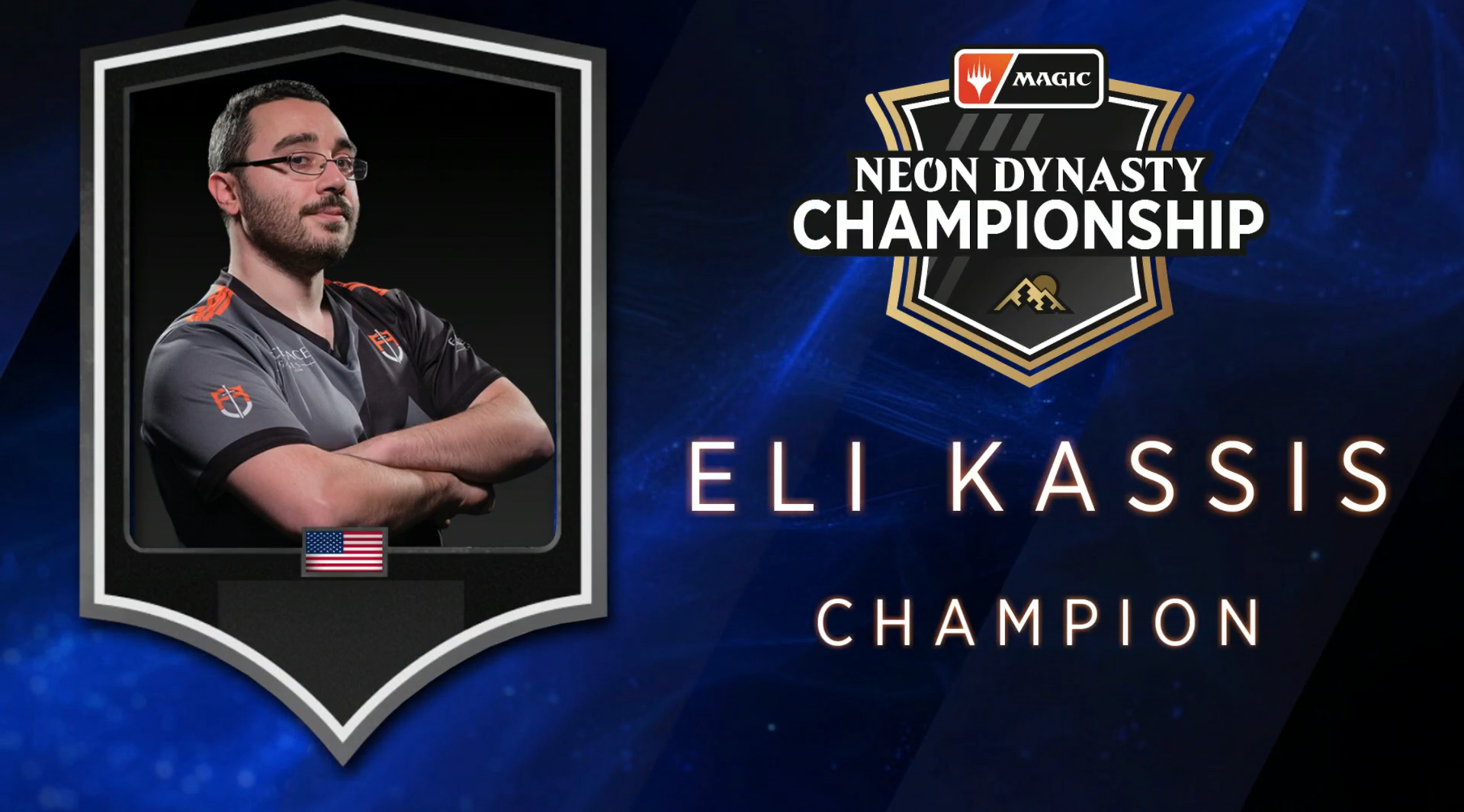 It was a long and grueling day of competition at the Neon Dynasty Championship, as the 8 Top 8 finalists faced off in a double-elimination Alchemy tournament with six invites to the XXVIII World Championship and $450,000 in prize money at stake. championship is now over and we have our winner – Eli Kassis!

This article is the third and final day of our Neon Dynasty Championship coverage here at MTG Arena Zone. We’ll provide a narrative overview of some of the highlights from the day as well as the final results and other infographics from the tournament. For those who may have missed it, you can catch a replay of the all-day live stream on Magic’s official Twitch channel.

Below is all of our previous Championship coverage, including a recap of the two-day Swiss as well as a brief explainer on the tournament meta-game – we’ve even received spoilers from the casting team for the next one. Alchemy expansion: Kamigawa!

In the first two days of play, streamer Jim Davis caused a stir by pulling off an incredible perfect 12-0 run in the Swiss rounds. Unfortunately for Jim, he wasn’t destined to win the entire tournament – he lost a close game in the first game of the day against Eli Kassis, putting him in the bottom bracket from the start.

That wasn’t the end of Davis’ misfortune though. Later in the day, he faced Jonny Guttman and his Mono White Aggro deck, who aggressively knocked Davis down, forcing him to settle for seventh place. Kassis, meanwhile, was also destined to be kicked out of the top bracket in his next game, a 2-0 blowout against Yudai Miyano’s Esper Clerics.

This put Kassis on an accelerated course with Jean-Emmanuel Depraz, the other player besides Davis who managed to go undefeated on day one, in the bottom bracket. Depraz had just managed to survive his first match in the bottom bracket by knocking out Brent Vos when he had to face Kassis, which resulted in back-to-back matches against Orzhov Venture. Depraz failed to pass twice in a row, however, and Kassis took the win.

Kassis still had to go through two more matches to qualify for the final, first against Guttman’s Mono White and then a rematch against Yudai Miyano. Kassis, however, persisted and managed to prepare for the final.

The other player to reach the final, American student Zach Dunn, won all three of his matches in the top bracket before facing Kassis. The finals were played over three complete best-of-three matches between Kassis and Dunn in a showdown of the tournament’s two breakaway Alchemy decks: Orzhov Venture and Mardu Midrange with Citystalker Connoisseur and Fable of the Mirror-Breaker.

It was an incredibly close series of matches, with the advantage shifting from player to player at least once in almost every game. Ultimately, the added advantage gained from Kassis’ adventure in the dungeon with cards like Triumphant Adventurer and Nadaar, Selfless Paladin knocked Zach Dunn out of the game despite performing admirably.

In the final match, with Kassis already one game ahead, Dunn was on his back with a dwindling life total. Dunn had a decent board presence, including The Wandering Emperor, but Kassis ripped The Meathook Massacre off the top of his deck. This allowed Kassis to mop up Dunn’s board while leaving his Nadaar behind, setting him up to take out Dunn’s Emperor and line up exact kill damage on his next turn. It was an intense game, and we absolutely encourage all interested players to watch for themselves.

There are two big takeaways from the performance of the various Alchemy archetypes this weekend. First, Naya Runes was considered the deck to beat and made up over 18% of the field. However, all of the players who weren’t playing with Naya had prepared for the game. 23% of the competition chose to play Mono White in part due to the good matchup they have with Naya.

One card that ended up being important in both Mono White and some other white decks, such as Orzhov Venture, was Archon of Emeria. The three-mana Archon stops the Runes deck in its tracks by preventing it from tripping rune after rune. This isn’t the first time Archon of Emeria has appeared in the Overall Championships, but it’s definitely the most we’ve seen play â€“ the card was even in quite a few main decks.

In the end, the Orzhov Venture decks had the highest overall win rate at 61.8% – clear evidence that the archetype has increased significantly in power after the recent rebalancing.

In Historic, none of the major archetypes finished the tournament with some of the high win rates we saw in Alchemy. Azorius Control and Azorius Yorion had the highest win rates in the format, at 54.5% and 57% respectively.

Interestingly, similar Azorius Lotus Field decks performed significantly worse, with a mediocre 43% win rate. This appears to be at least partly due to Lotus Field performing poorly in near-mirror compared to other UW bridges. Izzet Phoenix, which was the most popular historical deck in the tournament by a significant margin, performed admirably with an overall win rate of 52.8%. It was good enough to help Kassis break into the Top 8 after all, although the elimination tournament was entirely in Alchemy. Each of the top six finishing players – that is, players who managed to win at least one game in the playoffs – also earned qualification for the upcoming XXVIII World Championship. The remaining qualifiers will be determined at the New Capenna Championship May 20-22. We’ll see you there.

This concludes our coverage of the Neon Dynasty Championship on MTG Arena Zone. Follow these links to find our coverage of day one and day two of the event, and you can also check out magic.gg for more official coverage. The next Set Championship will be the New Capenna Championship from May 20-22. Thanks for reading!