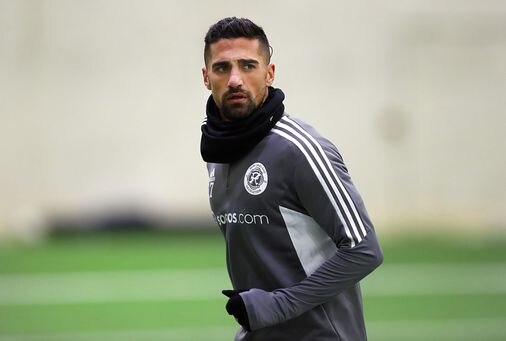 “He makes the transition as easy as possible,” Lletget said. “He’s that kind of manager who really cares about the players and he just knows how to read situations, knows how to communicate. He’s a demanding coach and he challenged me to dig deep and be as creative as possible in as an attacking midfielder.

“Where I was in my career when I arrived at Galaxy, he gave me that big step forward that every player needs.”

When the Revolution open the season in Portland on Saturday, Lletget, 29, will be in the starting lineup with another newcomer, Omar Gonzalez, his former Galaxy teammate. Two other ex-Galaxy players, Emmanuel Boateng and AJ DeLaGarza, are Revolution’s reserves.

Lletget was also drawn to Arena‘s high-octane attack. Last season, the Revolution led the league in goals (64) with a record of 22-5-7 (73 points), the best in league history.

Lletget thinks the Revolution have a chance of winning their first MLS Cup.

“I felt how great it is to win something, my first trophies, especially on the international stage,” he said. “With the Revs, I want to win something. Seeing them win the Supporters’ Shield last year and be very, very close to winning the MLS Cup, you know, I think this team has what it takes. In the short time I’ve been here, I see where this team can go.

Lletget will likely line up on the left side of midfield, supporting league MVP Carles Gil and strikers Gustavo Bou and Adam Buksa in the 4-4-2 setup.

“What really caught my attention was just the relentless way of attacking, the amount of numbers flying forward, and it’s over and over again,” Lletget said. “Guys don’t take games away, we just keep coming to teams. I don’t think I’ve been on a team like this since Bruce left, maybe.

“It’s his style. I think it brings out a lot of things in me and gives me a lot of options.

Lletget grew up with three sisters in San Francisco, descendants of Argentine immigrants. He showed his football promise early on, winning a trial with West Ham aged 13 and signing with the Hammers in 2011.

Lletget trained with first teams such as Mark Noble and Carlos Tevez, but his progress stalled under Sam Allardyce.

In 2015, Lletget joined the Galaxy, thriving under Arena, and making his international debut, also under Arena, with Team USA in 2017.

In his third game for the United States, he scored the opening goal in a 6-0 win over Honduras in a World Cup qualifier, but suffered a foot injury that threatened his career that kept him on the sidelines for almost a year. Lletget missed the remainder of the qualifying campaign as the United States failed to qualify for the 2018 World Cup.

Lletget relaunched his international career under Dave Sarachan in 2018 and has been a regular under Gregg Berhalter. Last year he started in American teams that won the Nations League and the Gold Cup, captaining the team twice, but he missed a lot of time with the Galaxy, who failed to qualify for the playoffs as he was limited to three goals in 26 appearances.

“There were, I think, some things that just didn’t fit my position in the team,” Lletget said. “Having so many international matches, leaving for a month and a half, Gold Cup, Nations League. I think there are a lot of things that, if you really look at it, it really makes sense that the numbers don’t add up.

Asked if the death in August of his sister Viviana affected him, Lletget replied: “I wasn’t going to, like, say it, but of course it was always on my mind. It was a tough thing to go through for anyone who’s ever been through it.

“We’re all going to go through something like this, unfortunately, it’s part of life. But this is the first time for me, so my emotions were like any other human, everywhere.

“And I think to be successful in your profession or any profession, that has to be very, very important to you, and when that happened with my sister, football kind of got dropped.

“You feel numb to life. There’s, like, this numb feeling that when we were going into games, even if we scored, it didn’t matter if I scored a last-minute winner, there was no emotion coming out of me.

“I’m never going to use that as an excuse because I actually had some good games in that time, which is weird, but I didn’t feel like I did because there was no was no positive emotion that came out of it.

“But I feel like I’m definitely turning a page.”

This year, national team commitments kept Lletget from joining his new teammates until earlier this month, when the Revolution were training (conveniently) in Los Angeles. He made his first appearance in a 4-0 pre-season loss to the Galaxy before finally arriving in Boston two weeks ago.

“I didn’t know what to expect from Boston,” Lletget said. “I only knew it was right next to New York and people from Boston had an accent and, what the hell, brownstone houses?”

“She filmed here and she loved it,” Lletget said. “She will be there for the home opener [against Dallas March 5].”

This will be Lletget’s first time playing in front of New England fans.

“I needed a new adventure,” he said. “I feel that I needed to redefine myself, to continue to question myself.

“I just want to constantly improve in my craft, I want to master my position, and Bruce is once again giving me another opportunity to do that that I just didn’t have in LA at the time.”