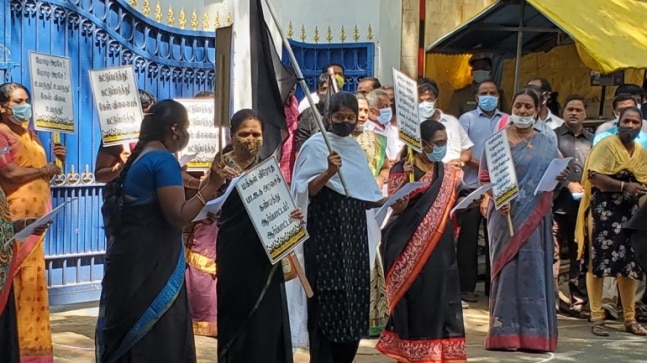 Dravida Munnetra Kazhagam (DMK) and its allies in the state held a black flag protest across Tamil Nadu on Monday. The protest was organized against the Centre’s policies on agricultural laws, the economic crisis, rising fuel prices, and more.

In Chennai, a black flag was placed at the residence of former Tamil Nadu chief minister Karunanidhi, while CM Stalin’s son Udhayanidhi Stalin protested at the party’s Anbagam office.

DMK MP Kanimozhi protested against her residence with officials from the women’s wing of the DMK. Slogans have been launched against the BJP-led government, criticizing its various policies.

“The Pegasus issue is still unresolved and the Farmers Bill, which goes against the interests of farmers that the government has not listened to, and the economy is slipping by the day,” Kanimozhi said during a protest.

Kanimozhi also alleged that the Center is not interested in solving the state’s problems and highlighted the perception of the GST, claiming that the state’s autonomy is in danger.

â€œWe have kept saying that we want education to be back on the state list. The workers ‘code, the farmers’ bill and everything is eroding the autonomy of the state, so obviously it is in danger, â€Kanimozhi said.

Asked about the Centre‘s idea of â€‹â€‹subjecting fuel to GST, Kanimozhi said reducing the price of fuel and bringing it back to GST would reduce state revenue.

“Already, they are not returning the collection of the GST that is owed to us,” she said.

â€œIn accordance with the multi-stakeholder meeting held in Delhi on August 20 under the leadership of Rahul Gandhi, we organized a protest against the BJP government against its action to sell public sector units to individuals,â€ said KS Alagiri.

READ ALSO : RN Ravi is sworn in as governor of Tamil Nadu

The Mid-South Fair will be held from September 23 to October 3.