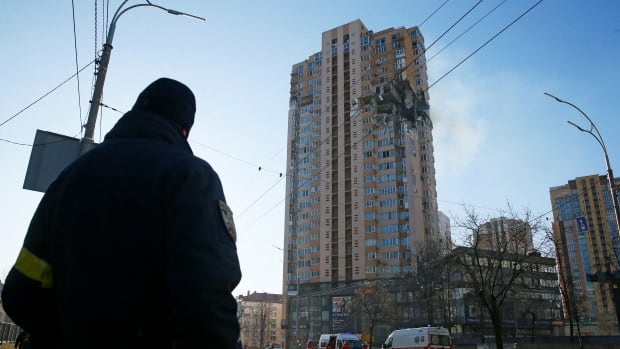 Russian troops headed for the Ukrainian capital on Saturday after a night of explosions and street fighting that sent Kiev residents to seek refuge underground. The country’s leader turned down a US offer to evacuate, insisting he would stay.

It was not immediately clear how far the Russian troops had advanced. Ukrainian officials reported success in repelling the assaults, but fighting persisted near the capital. Reported skirmishes on the outskirts of the town suggested that small Russian units were trying to clear a path for the main forces.

PICTURES | Scenes in Kiev as the Russian invasion progresses:

Russia says its assault on Ukraine is aimed only at military targets, but civilians have been killed and injured in Europe’s biggest ground war since World War II.

Ukraine said more than 1,000 Russian soldiers had been killed. Russia has not released casualty figures. Ukraine’s health minister says 198 people were killed, including three children, and more than 1,000 others were injured. His statement did not reveal whether the victims included both soldiers and civilians.

The mayor of the Ukrainian capital imposes an intensified curfew as Russian troops invade the city. Kyiv Mayor Vitaly Klitschko said on the Telegram messaging app that he was extending curfew hours from 5 p.m. to 8 a.m. local time.

“All civilians on the street during the curfew will be considered members of the enemy’s sabotage and reconnaissance groups,” Klitschko said.

Earlier, a missile hit a high-rise building on the city’s southwestern outskirts, near one of Kiev’s two passenger airports, leaving a jagged hole of ravaged apartments over several floors. A rescue worker said six civilians were injured.

The conflict has already driven hundreds of thousands of Ukrainians from their homes. UN officials said more than 120,000 Ukrainians had left the country for Poland, Moldova and other neighboring countries.

It was unclear how much of Ukraine was still under Ukrainian control and how much Russian forces had seized. The Russian Defense Ministry claimed that the Russian military had taken full control of the southern town of Melitopol, about 35 kilometers inland from the coast of the Sea of ​​Azov, and said that the Russian-backed separatists had made significant gains in the eastern Donbass region.

Ukrainian and Western officials, however, say Ukrainian forces managed to slow the Russian advance. Ukraine’s infrastructure ministry said a Russian missile was shot down before dawn on Saturday as it headed towards the dam of the vast water reservoir that serves Kyiv.

Western officials believe Russian President Vladimir Putin is determined to overthrow the Ukrainian government and replace it with his own regime. The invasion represented Putin’s boldest effort yet to redraw the map of Europe and revive Moscow’s Cold War-era influence. This sparked new international efforts to end the invasion, including direct sanctions against Putin.

Putin calls on Ukrainians to surrender in bizarre call for diplomacy

Russian President Vladimir Putin has called on Ukrainians who are defending their country to surrender, saying it will be easier to reach a diplomatic agreement than with the current leaders in Kiev. 2:40

Zelensky on Saturday renewed assurances that the country’s military would resist the Russian invasion. In a provocative video recorded on a street in downtown Kyiv, he said he had stayed in the city and claims that the Ukrainian military would lay down their arms were false.

“We are not going to lay down our arms. We will protect the country,” the Ukrainian president said. “Our weapon is our truth, and our truth is this is our land, our country, our children. And we will defend all of that.”

Zelensky said in a second video later Saturday that Moscow’s plan to quickly seize the capital and install a puppet government had failed. In an emotional speech, he accused Russian forces of hitting civilian areas and infrastructure.

The president’s whereabouts have been kept under wraps after he told European leaders in a call on Thursday that he was Russia’s No. 1 target – and they may not see him alive again .

The US government urged Zelensky early Saturday to evacuate Kiev, but he refused the offer, according to a senior US intelligence official with direct knowledge of the conversation. The official quoted the president as saying “the fight is there” and that he needed anti-tank munitions but “not a round”.

The official spoke on condition of anonymity as he was not authorized to speak to the media.

Ukraine relies on desperate countermeasures – including homemade weapons like Molotov cocktails – to try to counter the superior might of the Russian military. 1:58

The UN estimates that up to five million people could flee if the fighting intensifies. Refugees arriving in the Hungarian border town of Zahony said men of fighting age were not allowed to leave Ukraine.

About 100,000 people have entered Poland from Ukraine since Russia launched its invasion, including 9,000 who have entered since 7 a.m. local time on Saturday, Poland’s deputy interior minister said. Pawel Szefernaker at a press conference.

Kyiv city officials have urged residents to take shelter, stay away from windows and take precautions to avoid flying debris or bullets. Many spent the night in basements, underground parking lots and subway stations.

“We are all scared and worried. We don’t know what to do then, what will happen in a few days,” said Lucy Vashaka, 20, a worker at a small hotel in Kiev.

A British official, Armed Forces Minister James Heappey, said fighting in the capital had so far been confined to “very isolated pockets of Russian special forces and paratroopers” and that “the main armored columns approaching of Kiev are still far”.

The United States and other world powers decided to freeze the assets of Putin and his foreign minister on Friday as part of tougher sanctions against Russia as the invasion reverberated through the global economy and the energy supply.

Sports leagues have also sought to punish Russia, and the popular Eurovision Song Contest banned Russian acts from the event’s May final in Italy.

Russia has remained adamant, vetoing a UN Security Council resolution calling on it to stop attacking Ukraine and withdraw its troops immediately. The 11-1 vote, with China, India and the United Arab Emirates abstaining, showed significant opposition to Russia’s invasion of its smaller and militarily weak neighbor.

Dmitry Medvedev, the deputy head of Russia’s Security Council, has warned that Moscow could respond to sanctions by withdrawing from the latest nuclear arms pact, freezing Western assets and cutting diplomatic ties with Western nations.

“There is no particular need to maintain diplomatic relations,” Medvedev said. “We can look at each other through binoculars and sights.”

NATO, meanwhile, decided on Friday to send elements of the alliance’s response force to help protect member countries in the east for the first time. NATO did not say how many troops would be deployed, but added that it would involve land, sea and air power.

The assault has been anticipated for weeks by US and Western allies and denied being in progress for so long by Putin. He argued that the West left him no other choice by refusing to negotiate Russia’s security demands.

Putin did not reveal his ultimate plans for Ukraine. Foreign Minister Sergei Lavrov gave a hint, saying: “We want to allow the Ukrainian people to determine their own destiny.”

The European Union and the United States have both announced sanctions on the personal finances of Russian President Vladimir Putin, also sanctioning Foreign Minister Sergei Lavrov in retaliation for the invasion of Ukraine. 2:32

Putin’s spokesman Dmitry Peskov said Russia recognizes Zelensky as president, but would not say how long the Russian military operation might last.

Zelensky on Friday offered to negotiate on a key demand from Putin: that Ukraine declare itself neutral and give up its ambition to join NATO. The Kremlin said it accepted Kiev’s offer to hold talks, but it appeared to be an effort to extract concessions from beleaguered Zelensky instead of a move toward a diplomatic solution.

What is a payday loan?

ASU will soon prioritize the renovation of the Desert Financial Arena