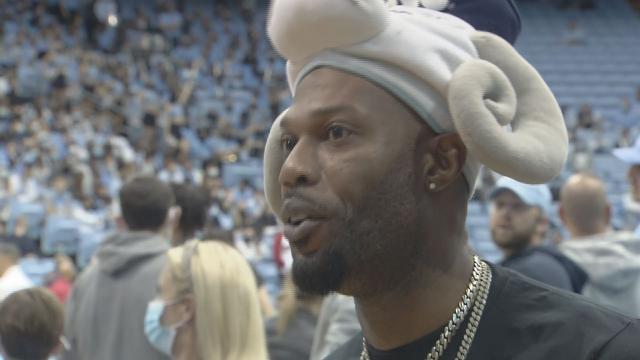 This season, North Carolina Basketball did something different. They hired B Daht, a comedian and radio personality, to be their arena host. Whether you’ve been there in person or just watched from home, there’s no doubting the impact he had at the Smith Center.

“His enthusiasm for this program, for our players, for this university is infectious,” UNC head coach Hubert Davis said of B Daht. “It’s great to have his energy in the game.”

Coach Davis wanted to put his unique mark on UNC in his first season at the helm of the program, so for his first Late Night as head coach he brought in B Daht as host. arena for the night.

“I considered it an audition,” B Daht told Chris Lea and Dennis Cox on the “Culture State” podcast. I’m going to come in here and I’m going to put on this event and I’m going to do such a great job that they’re going to say, ‘hey, we need to keep this energy here more often’.”

And that’s exactly what happened.

The Greensboro native was asked to host the arena during the regular season. B Daht says that as a Tar Heels fan, he wanted to help get rid of the “wine and cheese” crowd narrative from the blacksmith center.

“From 8 to 80 literally loving, so receptive to what I bring,” B Daht said. “But the reality is, all I’m doing is magnifying the energy that they already (have) anyway.”

And he wants that energy to have a positive impact on the players on the pitch, in hopes that it creates home-court advantage in the ACC…