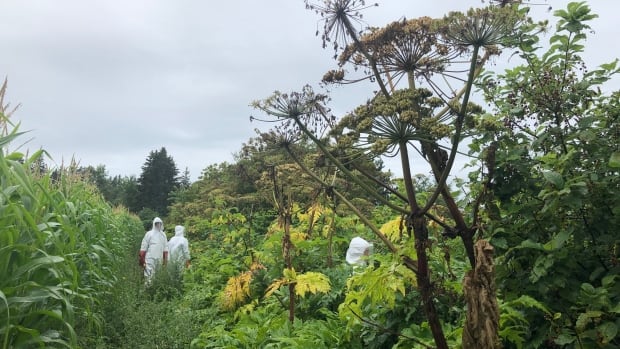 At the end of November, the PEI Invasive Species Council launched its new reporting system: a online mapping system called EDDMapS. It stands for Early Detection and Distribution Mapping System.

The system is already in use in several US states and some other Canadian provinces. It was established in 2005 by the Center for Invasive Species and Ecosystem Health at the University of Georgia.

Simon Wilmot, coordinator of the PEI Invasive Species Council, said the mapping tool is essential to the council’s plan to create an early detection and rapid response framework for invasive species on the island.

“What we are working to do is establish a cost effective way to manage the potential negative impacts of invasive species, and the key element is to detect these species when they arrive on the island and respond to them. as quickly as possible, “he added. Wilmot said.

Throughout the summer, the Invasive Species Council worked with local environmental groups to control the spread of invasive species such as giant hogweed.

Wilmot said previously that there are several databases and spreadsheets from different environmental organizations across the island that keep records of invasive species. He hopes this new mapping system will be a centralized location where Islanders can find information on invasive species.

How the mapping system works

When Islanders spot an invasive plant or insect on their property or in the wild, they can report through the EDDMapS app or website. These reports are then verified by an expert like Wilmot before being placed on the map of Prince Edward Island.

David Dutkiewicz, entomological technician at the Invasive Species Center in Sault Ste. Marie, in Ont., Said reporting through EDDMapS can help people learn more about what’s going on in their own backyards.

â€œIf they have something like EDDMapS and they see something weird on their property and they’re like, ‘Hey that’s weird, I’m going to take a picture of that’â€¦ they can send it to someone to have it verified and that verifier will give them back a yes or no answer, “he said.

“The sooner we can detect an invasive species that has been introduced recently, the easier it will be to respond to and eradicate that threat,” Vincentini said, adding that it pays to respond to these species before they spread. spread widely. .

According to Vincentini, EDDMapS combines information from another invasive species mapping tool called iNaturalist, so the system has a significant amount of invasive species data in Canada and the United States.

Reporting through the EDDMapS app and website is free, but users must create an account to report a sighting.

“We need the support of the public”

Wilmot said one of the main reasons Islanders should report sightings of invasive species on their properties is that most of the land in Prince Edward Island is owned by individuals, which means that many areas are not easily accessible to environmental groups.

â€œInvasive species obviously do not distinguish between public and private lands,â€ he said. “We need the support of the public to record these sightings or get in touch and let us know where they are.”

Dutkiewicz said that a single invasive insect, such as the Emerald ash borer could devastate Canadian forests and have a negative impact on the economy if not properly managed.

â€œYou talk about the loss of hundreds and hundreds of millions of trees, and that impact alone, you know, is economically huge,â€ Dutkiewicz said.

Vincentini said the more people there are looking for invasive species, the more time experts have to work on eradicating these species.

â€œYou also have people who are really starting to think about their actions and how they can contribute to the spread of invasive species,â€ she said.

The PEI Invasive Species Council is running a competition until February 1 to see who can report the most invasive species sightings through EDDMapS. More information on the Council’s Facebook page.

CFISD athletes write letters at the start of the signing period