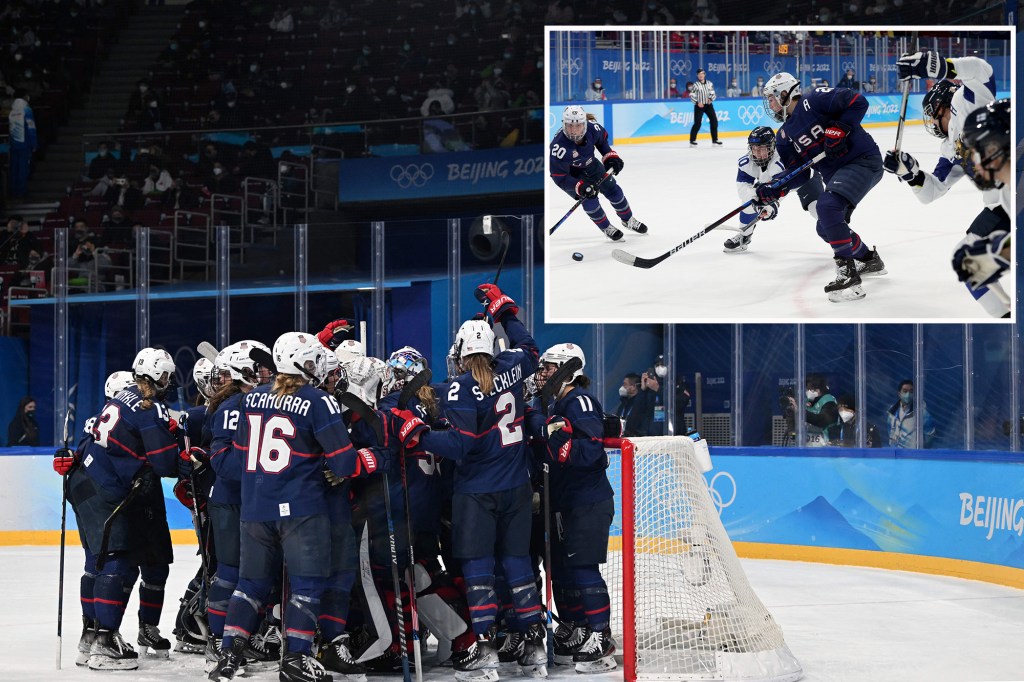 BEIJING — Hilary Knight had a goal and an assist, Alex Cavallini stopped 25 shots and the defending Olympic champion United States beat Finland 4-1 in the women’s hockey semifinals at the Beijing Games on Monday to set up the sixth confrontation for the gold medal between the Americans and Canadians.

The cross-border rivals will play on Thursday after Canada scored five first-period goals over an Olympic-record 3:24 in a 10-3 win over Switzerland earlier in the day. The two world powers have played for the championship in every Olympic tournament except the Turin Games in 2006, when Canada beat Sweden after the Swedes knocked out the Americans in the semi-finals.

This time, the United States is trying to defend its title after a 3-2 shootout win at the 2018 Pyeongchang Games, which ended Canada’s four-championship Olympic streak.

Cayla Barnes had a goal and an assist, while Hayley Scamurra and Abby Roque, with an empty net, also scored for the Americans.

Barnes opened the scoring at 3:39 of the start of the second period, closing in on the good point to convert Hannah Brandt’s pass into the slot for a power play goal. The stumble called against Finland’s Tanja Niskanen was questionable after it emerged the American player had fallen on her own.

Knight, playing her 21st Olympic game with the United States women’s team, scored with 1:07 left in the second period. Savannah Harmon’s initial shot was blocked and Knight reached for the loose puck to the left of the net and netted it for her 11th career Olympic goal to tie Jenny Potter for third on the USA roster.

Cavallini was strong in her third start of the tournament and lost her shutout on Susanna Tapani’s goal with 26 seconds left. Her best saves came in the last minute of the opening period when she pulled out her left leg pad to stop Michelle Karvinen, then pulled her glove up to fend off Karvinen who was trying to convert the rebound on a two-on-one run.

Finland will face Switzerland in the bronze medal game on Wednesday in a repeat of the same World Championship tournament clashes in August, when Canada beat the United States 3-2 in overtime of the championship game. Finland won bronze with a 3-1 victory over the Swiss.

Canada is considered the favorite in Beijing with a 6-0 record, including a 4-2 win over the United States in the preliminary round final last week.

Canada captain Marie-Philip Poulin, who scored twice against the Swiss, said it made no difference who her team faced in the final.

“We worked for those moments. We have been working for four years,” Poulin said. “I think we deserve it.”

Canadian player Sarah Nurse, however, was eager to renew the rivalry once again.

“Obviously playing against the United States is always an exciting game, always an exciting rivalry,” said Nurse, who had four assists. “Our biggest goal is to play another game at the Olympics. We came here to play seven games. We wanted the last one to be the gold medal game.

Opponent may not matter as Canada have been the most dominant team in the tournament raising the bar in how the women’s game is played with a deep four-line attacking style and relentlessly attacking.

Claire Thompson had a goal and two assists as Canada improved to 6-0 and edged their opponents by a combined margin of 54-8 to set a single Olympic tournament record for most goals. Canada’s previous mark of 48 at the Vancouver Games in 2010 had come in just five games.

“I think we’re taking the game to new heights right now,” Nurse said. “We play a style of hockey that has never been seen in our tournament before. And so, in 5 to 10 years, other countries will play our style of game, and we will continue to push the limits and continue to improve our sport.

“We just had a power outage for four minutes,” he said. “You can’t give them that momentum because they’re like sharks when they smell blood. And when they taste it, they leave.

The only consolation is how his team didn’t let up like they did in a 12-1 loss to Canada in the tournament’s opener. Lara Stalder and Alina Muller cut the lead to 5-2 before Poulin and Emily Clark responded by scoring 11 seconds apart to give Canada a 7-2 lead at 8:03 of the period.

Unlike the high-scoring Canadians, the U.S. struggled to get finishing chances while playing without first center line Brianna Decker, who broke her leg in a win 5-2 against Finland in the opening of the tournament.

The struggles continued Monday after a scoreless first period in which the Americans had a 12-6 shot lead. Keisala brought out his right pad to make a quarter save on Amanda Kessel on the breakaway, while Kelly Pannek was stopped trying to wedge a loose puck from the top of the crease.

Are financial regulators too political or not political enough?